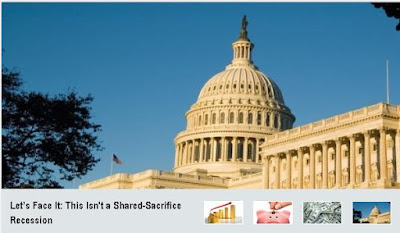 Let’s Face It: This Isn’t a Shared-Sacrifice Recession

Recent government figures concluded that the economy has lost more than 1.6 million jobs since Congress approved the stimulus bill in February. There is record unemployment in 12 states. Since January, the U.S. unemployment rate rose from 7.6 percent to 9.4 percent under Obama, the highest rate in 25 years. The stock market is down and flat. Gas prices are rising. Government has quadrupled the U.S. budget deficit. The national debt is at record levels. And, despite the record spending, big government programs are turning out to have the opposite effect on the economy.

But don’t worry. It’s not that bad. Not everyone is suffering. This isn’t a shared sacrifice recession.

Politicians may want the greedy bankers and CEO’s to suck it up and skip their bonuses, but don’t expect the elite in Washington to share in the suffering. This may be the worst recession since the Great Depression or since the Reagan years but don’t be fooled, our leaders in Congress aren’t hurting any.

After the stock market meltdown late last year, lawmakers gave themselves a $4,700 pay increase. This amounted to an additional $2.5 million that taxpayers spent on congressional salaries last year. In fact, Congress set it up so they would get their raise automatically, no matter what their work produces…

Threre’s much more.
You can read the rest here. There is also a list of my recent columns on this page.