Leftwing nut Joanie de Rijke traveled to Afghanistan to conduct a sympathetic interview with the Taliban. What happened next was horrific.
But, her response to the ordeal was even more shocking.

Joanie brought her tablet and pencils with her to the Taliban cave. 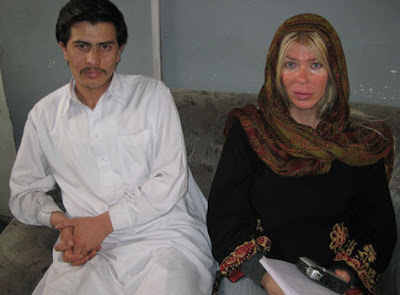 Joanie de Rijke was released by the Taliban in Afghanistan after a ransom of $137,000 was paid to the terrorist group. She was repeatedly raped by her captors but today believes they also respected her. (Clint.be)

In November 2008 a Dutch journalist, Joanie de Rijke, was abducted by Taliban fighters in Afghanistan. She was held captive, raped repeatedly, and released after six days for a ransom of 100,000 euros ($137,000). After her ordeal, she acknowledged that her captors “did horrible things to me,” but added in several media interviews “They also respected me,” and emphasized “They are not monsters.”

“She was raped, but she was not angry. The journalist who went looking for the Taliban in Afghanistan saw her curiosity end in a cruel ordeal of multiple rape. While this would make others angry or sad, this journalist shows understanding. She says: ‘They also respected me.’ And she was given tea and biscuits.”

“is a perfect illustration of the moral decline of our elites. They are so blinded by their own ideology that they turn a blind eye to the truth. Rape? Well, I would put this into perspective, says the leftist journalist: the Taliban are not monsters. Our elites prefer to deny reality rather than face it. One would expect: a woman is being raped and finds this unbearable. But this journalist is not angry because the Muslim involved also showed respect. Our elites, whether they are politicians, journalists, judges, subsidy gobblers or civil servants, are totally clueless. Plain common sense has been dumped in order to deny reality. It is not just this raped journalist who is suffering from Stockholm syndrome, but the entire Dutch elite. The only moral reference they have is: do not irritate the Muslims – that is the one thing they will condemn.”