At Friday prayers today in Tehran, Ayatollah Khamenei backed Mahmoud Ahmadinejad and warned the opposition of a crackdown if protests continue. 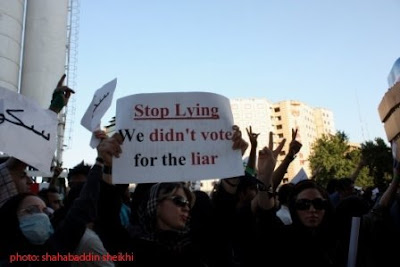 An Iranian protester responds to the regime.(Flickr)

Iran’s supreme leader said Friday that the country’s disputed presidential vote had not been rigged, sternly warning protesters of a crackdown if they continue massive demonstrations demanding a new election.

Ayatollah Ali Khamenei sided with hardline President Mahmoud Ahmadinejad and offered no concessions to the opposition. He effectively closed any chance for a new vote by calling the June 12 election an “absolute victory.”

The speech created a stark choice for candidate Mir Hossein Mousavi and his supporters: Drop their demands for a new vote or take to the streets again in blatant defiance of the man endowed with virtually limitless powers under Iran’s constitution.

Khamenei accused foreign media and Western countries of trying to create a political rift and stir up chaos in Iran.

“Some of our enemies in different parts of the world intended to depict this absolute victory, this definitive victory, as a doubtful victory,” he said. “It is your victory. They cannot manipulate it.”

Khamenei said the 11 million votes that separated Ahmadinejad from his top opponent, Mousavi, were proof that fraud did not occur. Ahmadinejad watched the sermon from the front row. State television did not show Mousavi in attendance.

Khamenei blamed the uprising on the “evil media belonging to Zionists” for seeking to show divisions between those who supported the Iranian state and those who did not.

Word to Obama: The political unrest in Iran does not represent a dilemma: it presents an opportunity.