The House will vote on the cap-and-tax bill today.
It is the largest tax in American history.

The state-run media is pushing hard for the junk science legislation to pass the House today.

Today is the planned vote on cap-and-trade, H.R. 2454. Speaker Nancy Pelosi has called a vote on this massive boondoggle before the 4th of July recess.

Michelle Malkin has a list of representatives on the fence.
Power Line sees this record tax limping across the finish line.

“Under my plan of a cap and trade system electricity rates would necessarily skyrocket. Businesses would have to retrofit their operations. That will cost money. They will pass that cost onto consumers.”

Barack Obama admitted cap and trade legislation would cause electricity prices to skyrocket.
Cap and trade will likely cost $700 to $1,400 dollars per US family per year:

Democratic Congressman John Dingell (D-MI) summed up cap and trade at a Congressional hearing on April 24th– “It’s a Great Big Tax!”
It’s not just a great big tax… It’s the biggest tax in US history. 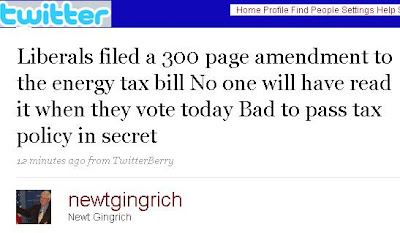 Early this morning, Waxman dropped a 300-page amendment into it.

UPDATE 3: More from Instapundit— INVESTOR’S BUSINESS DAILY ON WAXMAN-MARKEY: “The House of Representatives is preparing to vote on an anti-stimulus package that in the name of saving the earth will destroy the American economy. Smoot-Hawley will seem like a speed bump.”