It looks like the situation in Iraq is playing a part in this revolution…
Iranian democracy protesters on Thursday carried signs warning the evil regime, “Do not forget what happened to Saddam Hussein!” 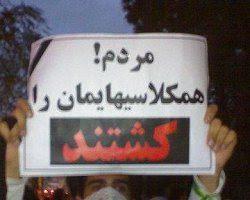 Thanks to George W. Bush, of course.

This helps answer the question, “Would There Be Green In Iran Without Purple In Iraq?”

Iranian ruler Ayatollah Khamenei promised to squash the protests today in his Friday sermon. But this did not faze the opposition.
The next protest is scheduled for Saturday at 4 PM at Revolution Square in Tehran.
Say a prayer for these brave people.

The US government broke its silence today.
Led by Rep. Mike Pence the US House passed legislation supporting the democracy protesters in Iran. Pence hailed the resolution saying, “There is an intention here, in a true spirit of bipartisanship, to allow the American people to be on the side of liberty and to be on the side of freedom.”
Meanwhile, President Obama is still silent— and by default, still supporting the regime.
Goodness… Even The Nation is criticizing Dear Leader for his tepid response. 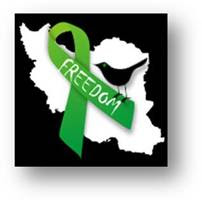 The Iranian people are chanting Allah o Akbar from roofs and balconies all over the city in response to Mousavi.

On Thursday club-wielding regime thugs attacked protesters including women in the streets:

Leftist organization Amnesty International reported that at least 15 Iranians were killed during the Iranian protests this week.