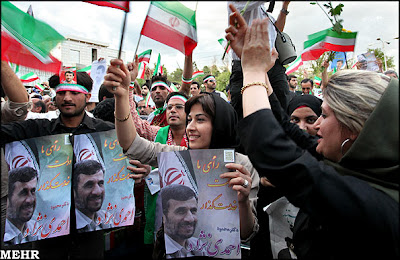 Azarmehr is covering the Iranian presidential election that will be held this month.
This past week a young girl working for the Ahmadinejad campaign was slapped at a rally for showing hair and wearing makeup:

The picture below shows some of AhmadinejAd’s supporters! Scarves pushed as far back as possible, wearing make up, hair colouring etc. and cheering for the very president who rebukes such appearances, after the elections, as manifestations of the enemy’s cultural onslaught on the country’s national security!

According to the Entekhab Daily printed in Iran, one of these very girls in such a gathering received a big slap across the face from a passer by. Entekhab reporter first remarks on the very short mantoes these girls were wearing while handing out leaflets and posters of Ahamdienjad. Then a young lad walks up to one of them and slaps one hard in the face.