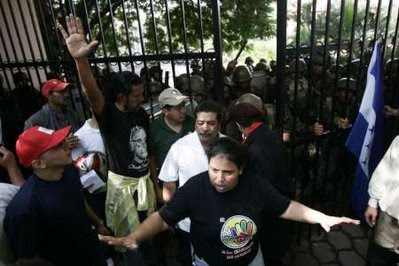 Supporters of Honduras’ President Manuel Zelaya gather in front of the president residency in Tegucigalpa June 28, 2009. Witnesses said Zelaya was detained at home by troops in a constitutional crisis over his attempt to win re-election. CNN’s Spanish-language channel later quoted Costa Rican officials as saying he was in Costa Rica and seeking political asylum. (REUTERS)

More than a dozen soldiers arrested President Manuel Zelaya and disarmed his security guards after surrounding his residence before dawn Sunday, his private secretary said. Protesters called it a coup and flocked to the presidential palace as local news media reported that Zelaya was sent into exile.

The chief executive was detained shortly before voting was to begin on a constitutional referendum the president had insisted on holding even though the Supreme Court ruled it illegal and everyone from the military to Congress and members of his own party opposed it.

Zelaya was taken into military custody at his house outside the capital, Tegucigalpa, and whisked away to an air force base on the outskirts of the city, his private secretary, Carlos Enrique Reina told The Associated Press.

Tanks rolled through the streets and Army trucks carrying hundreds of soldiers equipped with metal riot shields surrounded the presidential palace in the capital’s center. About 100 Zelaya supporters, many wearing “Yes,” T-shirts for the referendum, blocked the main street outside the gates to the palace, throwing rocks and insults at soldiers and shouting “Traitors! Traitors!”

Fausta has a roundup on the Honduras coup.

Piece of Work in Progress translates the AP report:

You won’t really grasp it from the AP article, but the Honduran coup is about President Zelaya’s extra-constitutional attempt to extend his term. He would be out of office in January, but he wanted a referendum to permit him to run again. The Supreme Court stated that would be unconstitutional. The army general who was to have distributed the ballots refused, and was sacked. The military then snatched him from his villa and shipped him off to Hugo.

Figures… Barack Obama meddled and worked to prevent the ouster of this leftist tinpot dictator.
…When a Leftist dictator’s career is on the line, Obama finds reason to meddle.
When Iranian democracy protesters are slaughtered on the street, Obama refuses to insert himself into the “debate.”

Gateway, this is not a coup, this is the Honduran Armed Forces carrying out an order of the Supreme Court of Honduras and the congress, as well as military leaders that refused to buckle to Zelaya’s attempt to fully Chavez-ize the nation….

Today is a day of liberty in Honduras.