Birds of a Feather… 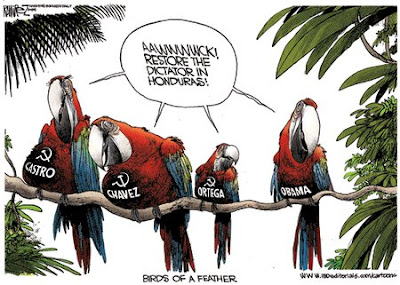 Gingrich blasted Obama for opposing the coup in Honduras, which the former GOP leader insisted would have left in place a “leftist dictatorship.” 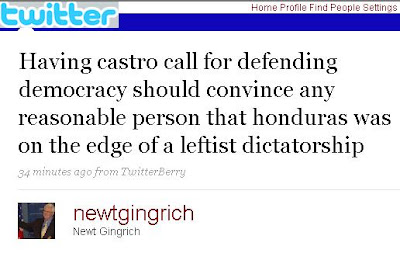 More… Monica Showalter at Investor’s Business Daily has more on Obama’s disgraceful reaction to the situation in Honduras:

President Obama on Monday called the action “not legal,” and claimed that Zelaya is still the legitimate president.

There was a coup all right, but it wasn’t committed by the U.S. or the Honduran court. It was committed by Zelaya himself. He brazenly defied the law, and Hondurans overwhelmingly supported his removal (a pro-Zelaya rally Monday drew a mere 200 acolytes).

In doing this, the U.S. condemned democrats who stood up to save their democracy, a move that should have been hailed as a historic turning of the tide against the false democracies of the region.

The U.S. response has been disgraceful. “We recognize Zelaya as the duly elected and constitutional president of Honduras. We see no other,” a State Department official told reporters.

Worse, the U.S. now contemplates sanctions on the tiny drug-plagued, dirt-poor country of 7 million, threatening to halt its $200 million in U.S. aid, immigration accords and a free-trade treaty if it doesn’t put the criminal Zelaya back into office.

Not even Nicaragua, a country the State Department said committed a truly fraudulent election, got that. Nor has murderous Iran gotten such punishment, even as it slaughters Iranian democrats in the streets. But tiny Honduras must be made to pay.