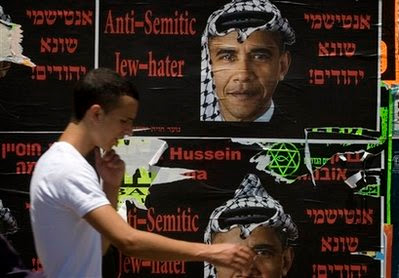 Isrealis see through the hype– Only 6% see Obama as pro-Israel.
The Jerusalem Post reported:

The poll, which has a margin of error of 4.5%, was conducted among a representative sample of 500 Israeli Jewish adults this week, following Prime Minister Binyamin Netanyahu’s speech in which he expressed his support for a demilitarized Palestinian state.

Another 50% of those sampled consider the policies of Obama’s administration more pro-Palestinian than pro-Israeli, and 36% said the policies were neutral. The remaining 8% did not express an opinion.

The numbers were a stark contrast to the last poll published May 17, on the eve of the meeting between Netanyahu and Obama at the White House. In that poll, 31% labeled the Obama administration pro-Israel, 14% considered it pro-Palestinian and 40% said it was neutral. The other 15% declined to give an opinion.