Last week, Dear Leader fired inspector general Gerald Walpin after he identified millions of dollars in AmeriCorps funds that were wasted or misspent. The man in charge of Americorps is a top Obama supporter and friend. Mayor Kevin Johnson used AmeriCorps grants to pay volunteers to engage in school-board political activities, run personal errands for Johnson and even wash his car. 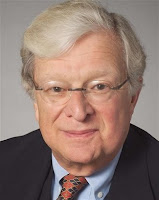 Obama fired Walpin after this discovery and replaced him with Michelle Obama’s friend.
Last night Obama said he fired Walpin because he was crazy.

The government watchdog President Obama canned for allegedly being “confused” and “disoriented” fired back sharply Wednesday, saying the White House explanation for removing him was “insufficient,” “baseless” and “absolutely wild.”

Gerald Walpin, who until last week was the inspector general for the Corporation for National and Community Service, told FOXNews.com that part of Obama’s explanation was a “total lie” and that he feels he’s got a target on his back for political reasons.

“I am now the target of the most powerful man in this country, with an army of aides whose major responsibility today seems to be to attack me and get rid of me,” Walpin said.

Facing bi-partisan criticism for the firing, Obama sought to allay congressional concerns with a letter to Senate leaders Tuesday evening explaining his decision. In the letter, White House Special Counsel Norman Eisen wrote that Walpin was “confused” and “disoriented” at a recent board meeting, was “unduly disruptive,” and exhibited a “lack of candor” in providing information to decision makers.

“That’s a total lie,” Walpin said of the latter charge. And he said the accusation that he was dazed and confused at one meeting out of many was astonishing as rationale for his ouster.

“It appears to suggest that I was removed because I was disabled — based on one occasion out of hundreds,” he said.

“I would never say President Obama doesn’t have the capacity to continue to serve because of his (statement) that there are 56 states,” Walpin said, adding that the same holds for Vice President Biden and his “many express confusions that have been highlighted by the media.”

Michelle Malkin has more on the cronies scandal.