Once again Michael Moore shows why he is the darling of the Left. 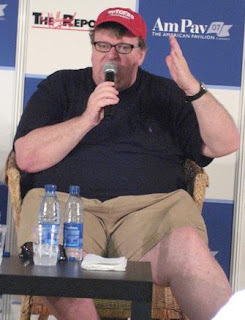 He celebrates Communist Cuba so it’s really no surprise that he would be joyful over General Motor’s ruin.
Michael Moore celebrates GM’s bankruptcy:

It is with sad irony that the company which invented “planned obsolescence” — the decision to build cars that would fall apart after a few years so that the customer would then have to buy a new one — has now made itself obsolete. It refused to build automobiles that the public wanted, cars that got great gas mileage, were as safe as they could be, and were exceedingly comfortable to drive. Oh — and that wouldn’t start falling apart after two years. GM stubbornly fought environmental and safety regulations. Its executives arrogantly ignored the “inferior” Japanese and German cars, cars which would become the gold standard for automobile buyers. And it was hell-bent on punishing its unionized workforce, lopping off thousands of workers for no good reason other than to “improve” the short-term bottom line of the corporation. Beginning in the 1980s, when GM was posting record profits, it moved countless jobs to Mexico and elsewhere, thus destroying the lives of tens of thousands of hard-working Americans. The glaring stupidity of this policy was that, when they eliminated the income of so many middle class families, who did they think was going to be able to afford to buy their cars? History will record this blunder in the same way it now writes about the French building the Maginot Line or how the Romans cluelessly poisoned their own water system with lethal lead in its pipes.

So here we are at the deathbed of General Motors. The company’s body not yet cold, and I find myself filled with — dare I say it — joy. It is not the joy of revenge against a corporation that ruined my hometown and brought misery, divorce, alcoholism, homelessness, physical and mental debilitation, and drug addiction to the people I grew up with. Nor do I, obviously, claim any joy in knowing that 21,000 more GM workers will be told that they, too, are without a job…

Classy. His hometown employer goes broke and he’s happy.
Moore explains that he is joyful over the ruin of GM so that he can push his leftist transportation ideas- rail service and buses.
There’s more:

We are now in a different kind of war — a war that we have conducted against the ecosystem and has been conducted by our very own corporate leaders. This current war has two fronts. One is headquartered in Detroit. The products built in the factories of GM, Ford and Chrysler are some of the greatest weapons of mass destruction responsible for global warming and the melting of our polar icecaps…

The other front in this war is being waged by the oil companies against you and me. They are committed to fleecing us whenever they can, and they have been reckless stewards of the finite amount of oil that is located under the surface of the earth. They know they are sucking it bone dry.

When government rakes in more money from gas sales than oil companies make in profit,
It’s pretty obvious who’s really fleecing us.
But, don’t try to explain this to a leftist like Moore.