Dr. Richard North from EU Referendum recently released Ministry of Defeat examining the political and military mistakes by the British during the Iraq War. 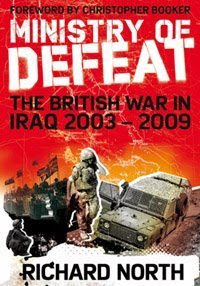 Ministry of Defeat by Dr Richard North is the first and only forensic examination of the political and military failures by the British during Iraqi Freedom. As the government, the media and the army were quick to downplay the challenges as the birth pangs of democracy, the evidence from the front line was telling a very different story. Ministry of Defeat explores that evidence and paints a picture of Southern Iraq very different to the popular narrative.

Richard North highlights the political indifference to military procurement and outlines the staggering, willful ignorance of the media and senior members of the government who should have known better. He also points the finger at a military establishment, untouchable in its arrogance, which not only refused to respond to threats but actively denied them.

North demonstrates how procurement has a direct impact on any force’s ability to wage a successful campaign and highlights the critical failures which lead to the deaths of scores of soldiers and countless Iraqis. He also shows how the political realities in Iraq were swept under the carpet to the detriment of public debate and subsequently policy. Unlike any soldiers eye view, in Ministry of Defeat we get a holistic view of situation on the ground and how it relates to events in Westminster; A tale of political opportunism, military incompetence and most damningly of all, a systemic parliamentary failure to scrutinise military affairs.