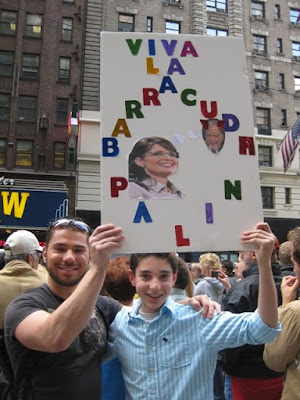 Rosita the Prole has photos and was on FOX News too. 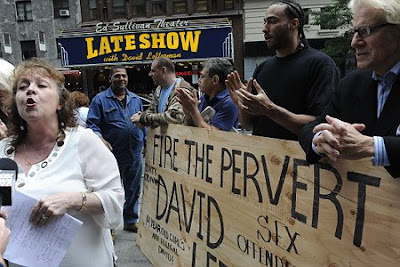 An apology from David Letterman was good enough for Sarah Palin – but not for protesters who demanded the late night host’s dismissal Tuesday at a Broadway demonstration.

“Fire Dave! Fire Dave!” the crowd of about 50 protesters chanted as Letterman fans filtered into the Ed Sullivan Theater for the show’s taping.

“I hope to have him see the light,” said demonstrator Josephine Sarnok, 59, of Newark. “I think it was over the line.”

BettyJean Kling, 61, accused Letterman of using the Alaska governor’s family to boost his ratings. She stood by a large plywood sign with the words “Fire the pervert” spray-painted across the front. 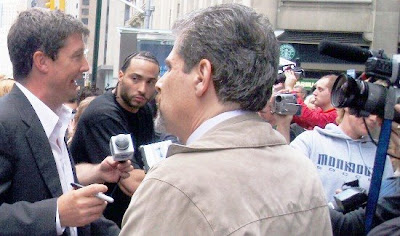 John Ziegler was at the rally along with a hundred anti-Letterman protesters. (Village Voice)

Letterman mocked the protesters tonight on his show.

The Berman Post has a few offensive photos from the protest.