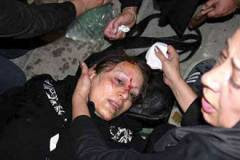 A wounded woman is treated at Baharestan Square in Tehran. (Al-Arabiya)

Saeed Valadbaygiat is liveblogging the protests from Baharestan Square in Tehran at Revolutionary Road .
This is an amazing report!

>In Baharestan Square the Police are shooting. A girl is shot and the police are not allowing to let the people help them.

>Cell network down in Baharestan & nearby area

>The girl who was shot was taken to a private clinic, not known yet of her well being…alive or not?

>All shops and Passages are closed at Baharestan SQ, Gunshot being heard from Jomhori St

> Gunshot being heard at Baharestan Square.

>Hezbollah Attcked to some people trying to gather at Tajrish Square

>Hezbollah Attcked to some people trying to gather at Tajrish Sq.

>More than 3 people have been shot in Baharestan’s conflict, The shooting is still continues and conflicts increasing!!!! 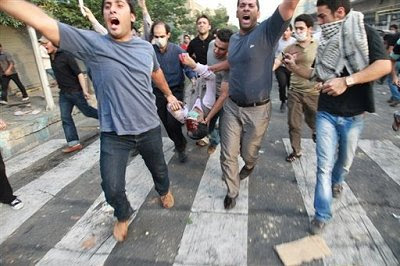 “I see many ppl with broken arms/legs/heads – blood everywhere – pepper gas like war… ppl run into alleys and militia standing there waiting – from 2 sides they attack ppl in middle of alleys…
saw 7/8 militia beating one woman with baton on ground – she had no defense nothing -… so many ppl arrested – young & old – they take ppl away” just in from Baharestan Sq – situation today is terrible – they beat the ppls like animals Ppl gathered in Baharestan but police & plain cloths don’t let the core of the rally to form.

More… Mousavi was scheduled to speak outside of parliament today.
There are unconfirmed reports on a planned arrest or assassination of Mousavi with the assassin killed on the spot.

The Tehran Bureau is also updating from Baharestan.

More… Reliable source: The people run into alleys and militia standing there waiting – from 2 sides they attack the people in middle of alleys #Iranelection

UPDATE: The barbeque is still on.

UPDATE: Al-Arabiya TV is reporting that at least one woman has died at Baharestan Square.

UPDATE: Witnesses tell CNN– “This is a massacre.”

UPDATE: From Revolutionary Road— The military plain clothes have entered the crowd with high speed on bikes, they are beating people with cable and batons, almost everyone in the crowd is injured, there is blood everywhere!

UPDATE: CNN: Source says “500 thugs” with clubs came out of a mosque and attacked people at a square in Tehran.

UPDATE: In new footage aired on Sky News, protesters in central Tehran shout “Die, die dictator”. It is unclear if it was taped today.

UPDATE: Unconfimed from Revolutionary Road— In Baharestan we saw militia with axe choping people like meat – blood everywhere – like butcher. 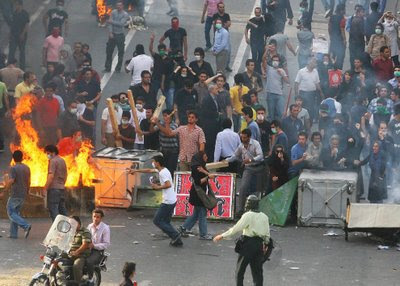