St. Louis’ own Kevin Jackson, emcee of the St. Louis Tea Party on April 15, author of The Black Sphere blog, contributor to American Thinker, entrepreneur, consultant, father, and God-fearing black conservative, decodes Democrats in his new book – The Big Black Lie. You can pre-order this book, a “must have” in every conservative’s collection today. And, shoot Kevin a message [[email protected]] and arrange to get your book signed personally. 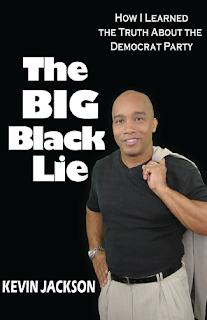 I didn’t see my father for many years after he and my mother separated and ultimately divorced. I would learn that he was a womanizer, an incestuous rapist, an alcoholic, a drug addict, a gangster, a pimp-wannabe, a thief, a convict, a child molester, and a murderer.

I was fortunate not to learn most of what my father did until much later in life. However, when I did learn of my father’s past, I couldn’t help but question what part of him might lurk within me. With all this baggage and plethora of built-in excuses, I am amazed that I did not become a Democrat.

I wanted to know what made my dad the way he was. Unfortunately, since I didn’t grow up knowing my father’s family, I didn’t have much history. My paternal grandfather came once to visit my brother and me on the ranch where we were raised. I was around nine years-old at the time; that was the one and only time I ever saw and spoke with him in person.

I learned that my paternal grandfather was an alcoholic, who would arrive home most nights in a drunken stupor. Bloody from the beatings of street predators of Indianapolis, my grandfather lost both his money and a piece of his soul. Unknown to them, they were slowly stealing the innocence of the two young boys who waited at home for the man who was supposed to be their idol, their protector, their provider, their father. Seeing their daddy beaten and bloodied would breed a rage in these two boys that would later be unleashed on the world. They were two boiling cauldrons, destined to bubble over and vomit their murky contents into society.

My father would do a stint in prison for armed robbery, as did my uncle. Many of my male cousins on my father’s side are convicts, who lived very similar lives. Most of their crimes involved drugs, and in some cases more serious offenses. Chances are, had I not been raised by my maternal grandparents, I would have had a similar fate. In fact, I would bet on it.

Being a Jackson in Indianapolis or Bloomington Indiana essentially put a target on your back; the cops were extra vigilant when it came to dealing with the Jacksons. Many in law enforcement had sent Jackson family men scurrying from Indiana to less prosecutorial climes.

Then there were the street thugs with unresolved street grudges. One of which grew into an actual plan to kill one of my uncles. To this day, he is unaware of just how close to death he actually came. I learned the story from a cousin.

Many of the female cousins on my father’s side who had significant interaction with my father are in relationships with men very similar to him, or unable to maintain healthy relationships with decent men. Relationships are tough. But my father has definitely impacted the women in our family negatively. On the bright side, a few of my female cousins actually did discover exactly what type of man they didn’t want, as a result of being around my father. That’s a costly way to look for the “good” in a situation. But I have learned that where my father is concerned, I take whatever good I can find.

As for relationships, my brother has been with the same woman since he was nineteen. Unfortunately my track record is a bit bumpier. I’ve been married twice, with a couple of “common law” situations as well. But my interaction with women is nothing like that of my father. In fact, I grew up with a healthy respect for women, because of my grandmother.

How much of me I credit to my dad I am not quite sure; his blood does course through my veins. It makes me wonder sometimes—actually a lot of the time. Seeing or hearing about him with a different woman during each visit or phone conversation most likely impacted me, though it doesn’t seem to have affected my brother in the same way.

I have never used drugs, and am a social drinker at best. I have been drunk only twice in my life. I womanized during a period of my life, and even shoplifted a couple of times as a teenager, but eventually overcame both of those impulses as I matured. I have wanted to kill a few people, but only figuratively.

When you don’t know your history, you question: What part is nature; what part nurture?

“Even a broken clock is right twice a day” – anon

I had no idea this was part of Kevin’s story.
What an amazing journey.
I will be joining Kevin next weekend in Columbia, Missouri at the Midwest FairTax Rally.
A group of Missouri Tea Party representatives will be holding a rally during the event at the Boone County Fairgrounds from 10:30 to 12:00 noon.