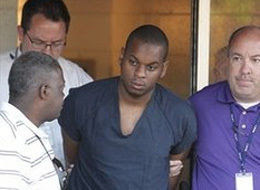 The man who shot dead an Army recruiter and wounded another in Little Rock trained in Yemen.
Abdulhakim Mujahid Muhammad converted to Islam and went to Yemen to study.
He told police earlier that he hated the US military.
ABC News reported:

The suspect arrested in the fatal shooting of one soldier and the critical injury of another at a Little Rock, Ark., Army recruiting booth today was under investigation by the FBI’s Joint Terrorist Task Force since his return from Yemen, ABC News has learned.

The investigation was in its preliminary stages, authorities said, and was based on the suspect’s travel to Yemen and his arrest there for using a Somali passport.

The suspect, Abdulhakim Mujahid Muhammad, 24, had changed his name from Carlos Leon Bledsoe after converting to the Muslim faith.

UPDATE: STACLU– The Little Rock attack shows why terrorism is not a police matter.