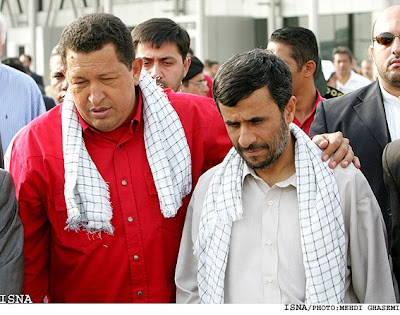 Venezuelan Marxist Hugo Chavez echoed Barack Obama today and asked the world to respect the wishes of the Iranian people to and to respect the election process.
The Examiner reported:

Aló Presidente is a TV show hosted weekly by Hugo Chavez. This Sunday, Chavez took the opportunity to show support for Iran’s president Ahmadinejad and asked the world to show respect for Iran.

He was quoted in Caracas’ el Universal as saying:

They are trying to undermine Ahmadinejad’s triumph, and with it weaken the government and the Islamic revolution. I know that they will not succeed.

It is not clear from the report to whom he was referring. Apparently, he is bent on making a gesture of solidarity with the declared winner of the contested election.

On Tuesday Barack Obama said he believed the ayatollah’s decision to order an investigation “indicates he understands the Iranian people have deep concerns.” Obama also said it would not be helpful if the United States was seen by the world as “meddling” in the issue.