The conservatives said the results vindicated their reluctance to spend more on company bailouts and fiscal stimulus amid the global economic crisis. 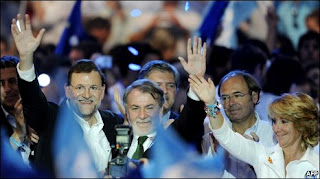 Spain’s centre-right Popular Party was one of the night’s big winners. (BBC)

Centre-right parties have done well in elections to the European Parliament at the expense of the left, according to exit polls and initial results.

The parliament’s 736 seats are up for grabs. Preliminary figures suggest the lowest-ever turnout, at 43.39%.

BBC correspondents say the figures will dent the EU’s credibility.

Centre-left parties are projected to have lost almost a quarter of their seats, while the centre-right is only slightly down.

Some smaller groupings such as the Greens have gained ground, while the third largest group in the parliament, the Liberals, lost seats.

Many Socialists ran campaigns that slammed center-right leaders for not spending enough to stimulate faltering economies.
They lost.