According to Gooya News Opposition leader Hossein Mousavi has been placed under house arrest by the coup d’etat regime. 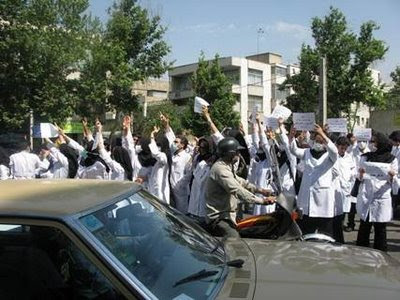 Nurses and doctors protest the regime’s violence in Tehran.

Revolutionary Road is reporting today that 38 people were murdered by the regime in last week’s protests including children:

The following email in Farsi we received today (Wednesday 24th june). It is written by a doctor from “Rasul Akram” hospital in Tehran who says that some people were killed not only by one bullet as they found two or three bullets in some bodies, close to one another, showing that shooters used barrage shooting against people and not only a single shot. A 68 year old man had 3 bullets in his body, two on his left shoulder and one in the left side of his stomach. The doctors of the “Rasul Akram”hospital say they had been faced with 38 people killed during last week’s protests. Apparently, police took the corpse of the dead bodies out from the hospital and carried them away by truck. Most of their families still do not know if their children have been killed. Besides, among the corpse there were some 15, 16 years old kids.

According to the email, the crew of the hospital protested in the street next to the hospital giving out the information about the violence to the people. The photos attached are from this demonstration which appears to have taken place earlier this week.

The pro-regime Iran Press TV website is reporting that 8 basiji members were shot dead during the Tehran unrest.
The truth is probably closer to the reverse… 8 opposition protesters were shot dead by basiji killers.