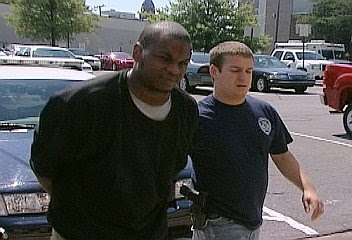 KATV released this photo of the suspect after he was arrested in Little Rock. According to Army Lt. Col. Thomas F. Artis, the two victims were not recruiters, but part of a recruiting program called “Hometown Recruiting Assistance.”

A United States Army recruiter was shot to death and a second recruiter seriously wounded by a man who opened fire from a vehicle Monday morning in a bustling suburban shopping center here, the police said.

A suspect in the shooting was arrested minutes later a short distance from the crime scene, by officers relying on a description of the vehicle, a black sport utility vehicle, provided by several witnesses. An assault weapon was taken from the S.U.V., a police spokesman said.

“He fired off several rounds,” a Little Rock police spokesman, Lt. Terry Hastings, said. “We have no idea of a motive.”

The names of the dead recruiter and his wounded colleague were not immediately disclosed. 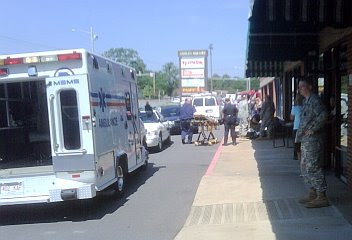 Recruiting commander Lt. Col Thomas Artis says the victims had just completed basic training and were spending two weeks in Little Rock training to recruit in their home area, showing the difference that less than two months of training made in their lives.

UPDATE: From the comments at TodaysTHV: The victims identified as deceased William Long of Little Rock. Queuton Ezeaghula was injured. This has not been confirmed.

UPDATE 2: Are we looking at Sudden Jihadi Syndrome?
Confirmed— 23-year-old William Long of Conway died shortly after being transported to a Little Rock hospital. Quinton Ezeagwula was injured.
Abdul Hakim Mujahid Muhammad, 24, of Little Rock was arrested for the shootings.

More… Squeaky posted this– Abulhakin Muhammad, also known as Carlos Bledsoe, will be charged with capital murder and 15 counts of terroristic acts after a shooting at an Army/Navy recruitment center on Rodney Parham Road in Little Rock.

This Ain’t Hell reported the shooter is a Muslim convert who opposed the US Military.

Still more… The accused shooter’s father, Melvin Bledsoe of Memphis, Tenn., hung up on a reporter who called about his son’s arrest Monday night.