The Arkansas jihadist Abdul Hakim Mujahid Muhammad says he was justified in killing US soldier Private William Long in cold blood. He said there was no crime. 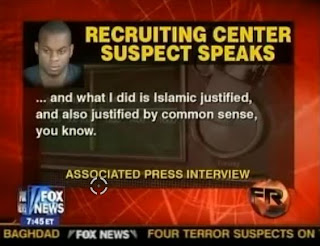 He said he was justified in killing the soldier.
FOX News has more:

“Yes, I did tell the police upon my arrest that this was an act of retaliation, and not a reaction on the soldiers personally,” Muhammad said. He called it “a act, for the sake of God, for the sake of Allah, the Lord of all the world, and also a retaliation on U.S. military.”

Muhammad, 23, said he wanted revenge for claims that American military personnel had desecrated copies of the Quran and killed or raped Muslims. “For this reason, no Muslim, male or female, sane or insane, little, big, small, old can accept or tolerate,” he said.

He said the U.S. military would never treat Christians and their Scriptures in the same manner.

“U.S. soldiers are killing innocent Muslim men and women. We believe that we have to strike back. We believe in eye for an eye. We don’t believe in turning the other cheek,” he said.

Muhammad shot the young soldier dead at the Arkansas recruiting station last week. He said it was Allah’s will. Muhammad also said definitely other Muslims will pull off jihadist attacks in the US.

Pvt. Long was the first American soldier killed in a domestic terrorist attack since 9-11:

Private William Long was buried yesterday on the same day he was to be deployed to South Korea.