Gee, that’s odd?
This didn’t make many headlines yesterday.
Hundreds showed up to protest Barack Obama in Green Bay where he held a rally to promote his government takeover of health care.
FOX WLUK reported:

One thousand protesters showed up to rally against Obama and nationalized health care.
This is catchy: “The Party of Know” 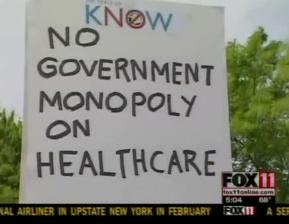 As the president’s motorcade passed by many people booed and offered a thumbs down.

FOX 11 WLUK reported on the protest:

Most of the protestors were part of a grassroots movement that calls itself “The Party of Know.” Jerry Bader, a conservative talk show host on WTAG 1360, helped organize the rally. Most protestors said their purpose Thursday was to let President Obama know just exactly how they feel about a government backed health care system.

“It doesn’t work,” Dawn Papapetru said. Papapetru said she feels an obligation to speak out. She now lives in Green Bay but was born and raised in Canada, a country that provides universal health care for its citizens.

“I know what the free health system is all about. It’s wrong. Taxes will go up, gas will go up and the lines get longer in hospitals,” Papapetru said.

President Obama has said he wants to model American health care reform after the Canadian system. The plan is designed to extend health care coverage to millions of uninsured Americans by offering a government backed health insurance option.

“The government has no need to get involved in my health decisions. I don’t want a government board telling me when and how and if I’m going to get health care,” Peter Soransen, of De Pere, said. Soransen was one of the hundreds of people who showed up hoping to have his voice heard.

Free Republic had this photo from the protest: 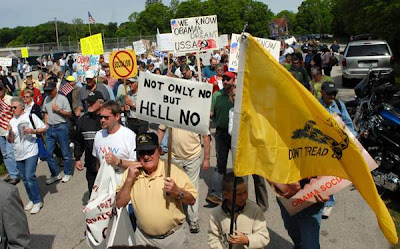