For some reason this did not make any headlines…
While Barack Obama refused to defend America, apologized for America, chuckled with thugs and listened to Marxist tirades against the United States at the Summit of the Americas…
President Oscar Arias of Costa Rica gave a pro-American speech. 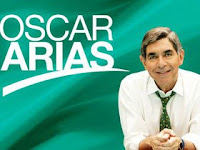 (Full translation of speech by Oscar Arias, President of Costa Rica, at the Summit of the Americas meeting in Trinidad & Tobago on April 18, 2009)

“I have the impression that every time Caribbean and Latin American countries get together with the president of the United States of America it is to ask for things or to demand something. Almost always it’s to blame the United States for our past, present and future ills. I don’t believe that is at all just. We cannot forget that Latin America had universities before the United States created Harvard and William & Mary, which are the first universities of that country. We cannot forget that in this continent, as in the whole world, at least until 1750 all Americans were more or less the same: all were poor.

When the industrial revolution came about in England, other countries hopped on that wagon: Germany, France, the United States, Canada, Australia, New Zealand…… and thus the Industrial Revolution passed over Latin America like a comet, and we didn’t realize it. Certainly, we lost the opportunity.

There’s also a very big difference. Reading the history of Latin America, compared with the history of the United States, one realizes that Latin America did not have a Spaniard John Winthrop, nor a Portuguese who might have come with a bible in hand, ready to build “a City on a Hill”, a city that would shine, as was the wish of the pilgrims who arrived in the United States.

Fifty years ago, Mexico was richer than Portugal. In 1950, a country such as Brazil had a higher per capita income than that of South Korea. Sixty years ago, Honduras had more riches per capita than Singapore, and today Singapore – in something like 35 or 40 years – is a country with $40,000 annual income per person. Well, we Latin Americans did something wrong.

What did we do wrong? I cannot list all the things we did wrong. To start, we have a seven-year schooling. That is the average length of schooling in Latin America and it’s not the case with the majority of Asian countries. It’s certainly not the case in countries such as the United States and Canada, with the best education in the world, similar to the Europeans’. For every 10 students who enter high school in Latin America, in some countries only one finishes. There are countries with an infant mortality of 50 children per thousand, when in the more advanced countries it is 8, 9 or 10. We have countries where the tax load is 12 percent of the gross national product, and it’s no one’s responsibility, except our own, that we don’t tax the richest people of our countries. No one is to blame for that, except we ourselves.

It’s nice to see someone at the conference was speaking out for America.