So much for saving and creating 2.5 million jobs–
The US has lost 16,000 jobs each day since Democrats passed their MASSIVE Generational Theft Act, the largest redistribution of wealth from the private sector to government officials in US history, without any GOP House votes.

16,000 Jobs Lost Each Day Since ‘Stimulus’ Became Law
After 100 days of ‘stimulus’ we have to ask: Mr. President, are you looking at the same numbers we are? 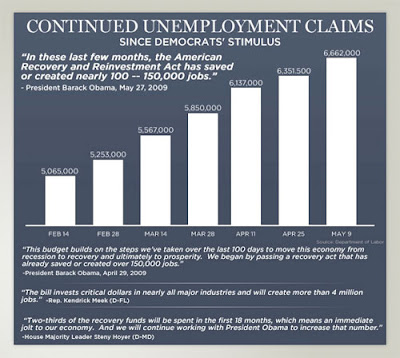 Republicans had a plan that created twice the jobs at half the cost.
Thanks Barack.

More… Via Instapundit— Exploding Debt Threatens America. “Under President Barack Obama’s budget plan, the federal debt is exploding. To be precise, it is rising – and will continue to rise – much faster than gross domestic product, a measure of America’s ability to service it.”

The president called the stimulus package “the most sweeping economic recovery act in history — a plan designed to save jobs, create new ones and put money in people’s pockets.” He said it already has created or saved nearly 150,000 jobs…

Texas Rep. John Culberson called the stimulus package “a fiscal flop and nothing to celebrate,” and he said that since the bill was signed Feb. 17, “1.597 million jobs have been lost and unemployment numbers at their highest levels in two decades.”