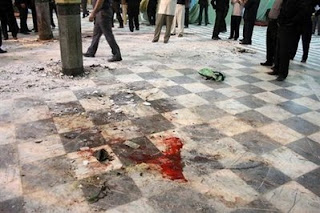 Blood stains the ground inside the Amir al-Momenin mosque following a bomb blast in the southeastern Iranian city of Zahedan. The blast killed at least 19 worshippers and wounded 80 others, the official IRNA news agency reported. (AFP/IRNA)

A suicide bomber killed 30 people at a mosque in the Sunni city of Zahedan in southeastern Iran today.
The Daily Times reported:

An explosion at a prominent Shia mosque in the southeast Iranian city of Zahedan on Thursday killed 30 people and wounded 60, the semi-official news agency IRNA reported.

It said the blast was a suicide bomb but no person or group had claimed responsibility.

Shortly after the explosion, security forces discovered and defused a second bomb near the mosque, the FARS news agency reported. The attack was carried out on a public holiday honouring the first Shia Imam, Ali Ebne-Abitaleb, after whom the mosque is named. Zahedan is a mostly Sunni city.

The provincial governor told state television the explosion occurred at about 1515 GMT when many people were offering prayers inside the mosque.

Zahedan is the capital of Sistan-Balochistan province, which shares a border with Pakistan. The province faces serious security problems and there are frequent clashes between police and drug dealers and bandits.