Taking a page from Barack Obama and Saul Alinsky…
“Pick the target, freeze it, personalize it, and polarize it.”

The Far Left dug into the divorce papers of Carrie Prejean’s parents to discredit the beauty who spoke out against gay marriage.
Currently if you Google “Prejean’s parents divorce” you get around 31,800 matches.
Sick. 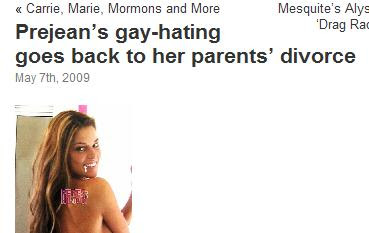 This is one of the attack pieces by the Far Left on Prejean posted at The Dallas Voice.
Notice: She’s a “gay hater” because she doesn’t approve of gay marriage.

So how does a beauty queen turn into the poster child against gay marriage? In the case of Miss California Carrie Prejean, the answer may lie in an ugly divorce that may have cemented her views on gay relationships.

Carrie’s parents filed for divorce in 1988 and the divorce and custody fights went on for more than a decade — it was a divorce filled with homosexual allegations hurled by both sides.

In one of the docs, Carrie’s dad describes a confrontation he had with her mom in 1996, in which he recounts an argument in a restaurant parking lot, where “Ms. Prejean accused me, in front of our daughter, of homosexuality.”

This is the latest example of the vicious “liberal onslaught” that Sarah Palin was talking about.
Attacking not only the target but the target’s family has been a very effective tool for communists and brutal regimes for decades.