Gallup reported today that more veterans tend to be Republican than the general public. 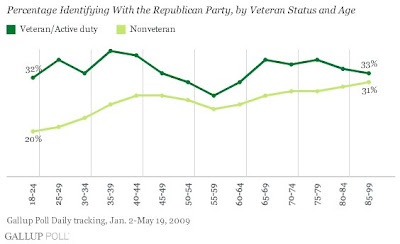 In the 25-29 age group the 32% of veterans say they are Republican compared to 20% who say they belong to the cut-and-run white-flag-waving party whose leader said that even genocide was no reason to keep US troops fighting in Iraq.

“(It should be noted that normal survey procedures would not include active-duty military serving overseas or on ships at sea.)”

In other words, the Gallup sample only drew upon those reachable by phone or cell within the US. Further, those on active duty within the US would be less likely to be near a phone.

The “statistical confidence”, therefore, expressed by Gallup is within those in the polling pool but not the nation’s vets and active service military.