“Our Constitution protects us all — not just those who agree with the far left.” 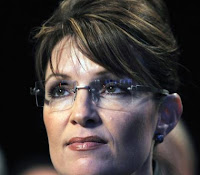 In a strongly worded statement relased late Wednesday, Alaska Gov. Sarah Palin defended Miss California Carrie Prejean and ripped into “the liberal onslaught of malicious attacks” against Prejean for her response to a question about gay marriage.

“I can relate as a liberal target myself,” Palin said. “What I find so remarkable is that these politically-motivated attacks fail to show that what Carrie and I believe is also what President Obama and Secretary Clinton believe — marriage is between a man and a woman.”

Prejean created a stir with her response to a question about gay marriage at last month’s Miss USA pageant, questions about her work with gay marriage opponents and nearly nude photos taken of her when she was a teenager put her title in jeopardy.

“I applaud Donald Trump for standing with Carrie during this time. And I respect Carrie for standing strong and staying true to herself, and for not letting those who disagree with her deny her protection under the nation’s First Amendment Rights,” the former vice presidential candidate said.

“Our Constitution protects us all — not just those who agree with the far left,” Palin said.

Andrew Brietbart was just telling Neil Cavuto yesterday that Palin should speak out in support of Carrie Prejean.
Maybe she was listening?