Bradley Neil Crowder assembled eight firebombs with the intent to use them on police during the RNC Convention. 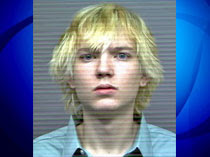 Bradley Neal Crowder will serve 2 years in prison for planning attacks during the RNC in Minneapolis.
The Star-Tribune reported, via Free Republic:

A protester from Texas has been sentenced to two years in prison for possessing Molotov cocktails during the Republican National Convention last September.

The 23-year-old Austin, Texas, man was part of a group from Austin that allegedly planned to disrupt the convention in St. Paul last September. He pleaded guilty in January.

Maybe he’ll illustrious teaching career when he gets out?