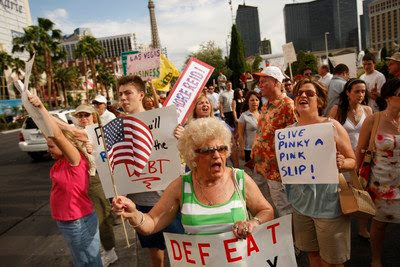 As Senate Majority Leader Harry Reid and President Barack Obama prepared for a fundraiser Tuesday evening to help get Reid re-elected, about 100 protesters worked the Strip in hopes of preventing just that.

Carrying signs and chanting slogans such as “Heave ho! Reid must go!” the protesters in front of Caesars Palace, where the fundraising concert was to take place, criticized Reid’s “tax-and-spend,” “big government” ways.

“I’m not a big fan of what’s going on in D.C.,” said the 6-foot-4, heavily tattooed Dan Stephens, a local tattoo artist who brought his three young daughters and also-heavily-tattooed wife to the protest. “It seems like our representatives have forgotten who hired them.”

The mostly Republican protesters said they want representatives who advocate for small government and are against tax increases.

“We need someone who shares our core principles: family, self-sufficiency, low taxes and getting government out of our lives,” said Dean Meek, a 51-year-old property manager who was carrying a sign that read: “Don’t tax me, bro.”

The protest was organized by Our Country Deserves Better PAC, a conservative, California-based political action committee that is campaigning against Reid’s re-election.