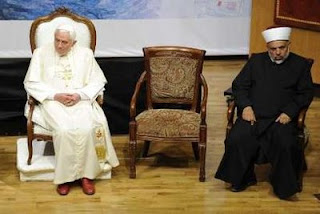 Pope Benedict XVI (L) sits beside senior Palestinian Muslim cleric Sheikh Taysir al-Tamimi at a meeting with representatives of the organizations for the inter-religious dialogue in the Our Lady of Jerusalem Centre in Jerusalem May 11, 2009. Tamimi fiercely denounced Israeli policy in Jerusalem in the presence of Pope Benedict on Monday and appealed to the pope to help end what he called the “crimes” of the Jewish state. (REUTERS/Tony Gentile)

Pope Benedict XVI walked out on a toxic anti-Israeli Islamic judge at a meeting in Jerusalem on Monday night.
Muslim cleric Sheikh Taysir al-Tamimi started shouting at the Pope during his speech at the event.
The Jerusalem Post reported:

In a meeting with organizations involved in inter-religious dialogue at the Notre Dame Jerusalem Center, Tamimi called upon Muslims and Christians to unite against what he said were the murderous Israelis.

Taking the podium after the pope without being on the original list of speakers scheduled for the evening, Tamimi, speaking at length in Arabic, accused Israel of murdering women and children in Gaza and making Palestinians refugees, and declared Jerusalem the eternal Palestinian capital.

Following the diatribe and before the meeting was officially over, the pope exited the premises. Army Radio reported that the pope shook Tamimi’s hand before walking out.

The Pope vowed to battle rising anti-Semitism during his speech today in Israel.