I am attending the Offshore Technology Conference this week in Houston, Texas.

The Offshore Technology Conference is the world’s foremost event for the development of offshore resources in the fields of drilling, exploration, production, and environmental protection.

Also here at the conference this week are are JR Hoeft (heh) from Bearing Drift, McQ from Q and O, Kevin Holtsberry from RedState, Joy McCann of Little Miss Attilla, and Nick Loris from Heritage’s “The Foundry“. More than 60,000 people are expected to attend this massive energy conference this week.

Meeting the Energy Challenge Panel Discussion
Senator Lisa Murkosky (R-Alaska) started out today’s panel discussion with a tape she sent in on America’s future energy demands. Murkoski reminded the audience that the United States consumes 20% of the world’s oil. Murkosky supports the research and development of domestic oil reserves. Of course, this is not a popular position in today’s political climate. If gas prices rise again to $4.00 per gallon then drilling and development would become popular again even with democrats. But, so far this year democrats have blocked all oil and gas research and development.

In fact, for decades Democrats have blocked efforts to responsibly develop this nation’s energy resources, transforming vast areas of opportunity into “The No Zone.”

The American Petroleum Institute, who paid for me to attend this conference, is hoping to initiate a realistic debate on the energy question. API is hoping to create a national discussion on realistic options for affordable energy that will spur the economy, not slow it.

The best line of the panel discussion came from a head of the airline industry who told the democrats on the panel that there was a disconnect between the so-called dialogue in government and the anti-energy policies coming from this administration and the current Congress. 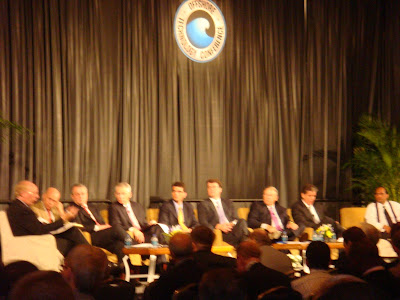 The audience agreed that consumers and the oil industry were under-represented in the energy policy debate and that environmental groups were over-represented. Today there are 4 green lobbyists in Washington for every member of Congress. 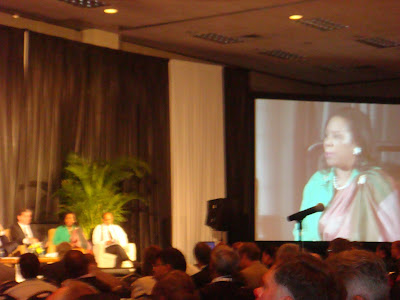 Rep. Sheila Jackson Lee made it to the panel discussion. She’s in the green. She was about an hour and a half late to the meeting.

“I like to believe in a seamless energy policy(?) As we moved into oil prices at $4 per gallon. We have gotten used to oil being the engine of the Houston economy. The new leadership of the US Congress and the president are moving to green energy. I believe that we should include small minority women owned businesses(?) We know Boone Pickens is supportive of wind and natural gas. There is an interest for the US government to get involved in the energy segment… I will be writing a energy security bill. It is all of these issues that are listed that are in discussion in the United States Congress…”

Obama Administration official says that people are gathering together in gangs in today’s political climate to get things done.
That seems about right.

“Gang members. That’s interesting. We have to find a way to reach individuals who are just making ends meet. One of the problems of gangs is that they have an internal stucture and closed to themselves. Again, we need to have a seamless energy policy(?) We need to see people listening to the diversity. There are not many in the US Congress who have the stomach to expand nuclear energy. Fossil fuel and natural gas will have their place… but not as much.”

And, this was from a Texas politician?
Jason Grumet, Executive Director National Commision of Energy Policy, says, “One of the real challenges we have is that clean is almost always new and new is almost always clean. We have a moment of community possibility in this country that we have not had before due to the current economic climate.”
It sounds like he is reading Alinsky, too.

More Grumet: “The current plans to reconfigure the national energy policies will be painful for us but we will see the benefit of these policies in 20 years.”
Only 20 years… Great!

Bearing Drift has much more from the panel discussion.