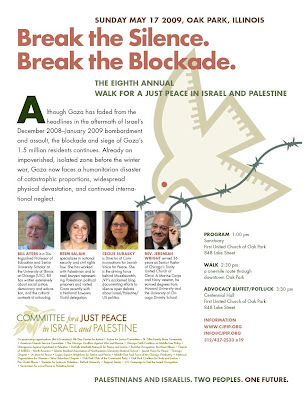 Committee for a Just Peace in Israel and Palestine

The Chicago Tribune reported, via Sweetness and Light:

The day before President Barack Obama was to meet with Israel’s prime minister, community activists, clergy and residents marched through Oak Park on Sunday to call for a just solution to the Israeli-Palestinian conflict.

And they were led in their efforts by a politically provocative pair from Chicago: Rev. Jeremiah Wright Jr. and William Ayers.

The two men shared the stage for one of the first times at First United Church of Oak Park during a forum before the annual walk.

They urged a rethinking of the Mideast conflict, a shift in perspective that’s not unlike the view espoused by Obama…

Organizers with the Committee for a Just Peace in Israel and Palestine said the two men, along with a Jewish activist and an Arab attorney, were invited for their work on the Israeli-Palestinian conflict, not their political notoriety. They did, though, draw a crowd of more than 400 that filled the church.

“We can’t be squelching viewpoints because they are unpopular or because someone has a reputation through Fox News,” said Caren Levy Van Slyke, a spokeswoman with the group. 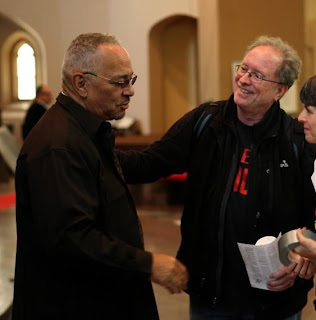 Rev. Dr. Jeremiah Wright and Dr. William Ayers are greeted by Rebekah Levin with the Committee for a Just Peace in Israel and Palestine. (Chuck Berman/Chicago Tribune / May 17, 2009)