Either he’s completely arrogant, a complete fool, or a combination of the two… 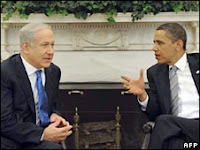 The chairman of the US joint chiefs of staff announced in March that Iran has enough fissile material to build one nuclear bomb. Waiting until the end of they year gives the Iranian regime even more time to ratchet up their operations.

Even as the would-be Hitler of Persia, Mahmoud Ahmadinejad, races towards the nuclear finish-line, the man sitting in the White House is doing little to stop him.

Indeed, as the Financial Times reports today, the Obama administration seems more concerned about Israel defending itself against Iran than about the Ayatollah’s atomic ambitions…

To all those American Jews who cast their ballots for Barack Obama in last November’s US Presidential election, it is time to admit the folly of your vote. By putting him in the Oval Office, you might just have endangered the future of the Jewish state.

Only 31% of Israel’s adult Jewish population considers Barack Obama’ administration to be pro-Israel.