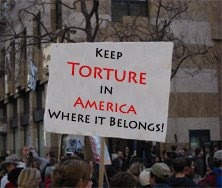 (Unconfirmed Sources)
Figures. For all of his belly-aching and political posturing about torture, it was reported today that Barack Obama is outsourcing torture to Middle East regimes.
STACLU reported:

When it comes to outsourcing, Obama is the king. He is outsourcing auto jobs to China. He outsourced the Generational Theft Act to Nancy Pelosi and Company. And, he is outsourcing interrogation, and possible torture.

The United States is now relying heavily on foreign intelligence services to capture, interrogate and detain all but the highest-level terrorist suspects seized outside the battlefields of Iraq and Afghanistan, according to current and former American government officials.

The change represents a significant loosening of the reins for the United States, which has worked closely with allies to combat violent extremism since the 9/11 attacks but is now pushing that cooperation to new limits.

In the past 10 months, for example, about a half-dozen midlevel financiers and logistics experts working with Al Qaeda have been captured and are being held by intelligence services in four Middle Eastern countries after the United States provided information that led to their arrests by local security services, a former American counterterrorism official said.

Five months ago this news would have made headlines for a week.
But, that was before Hopenchange arrived.
Today its just another news item.