While Democrats get their panties all tied up in a knot over splashing water on the faces of 3 Al-Qaeda killers…
Here’s a little reminder of what real torture looks like: 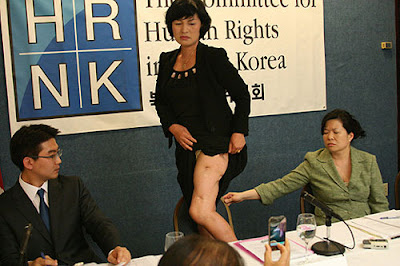 For the rest of America- here’s a report on real torture.
The Chosen Ilbo reported:

There were gasps in the audience at a press conference by female North Korean defectors in Washington, D.C. on Wednesday when Bang Mi-sun rolled up her black skirt and showed the deep ugly scars in her thighs. The event was part of North Korea Freedom Week.

As soon as she was asked to recount her life in a North Korean concentration camp, Bang (55) stepped on a chair and roll up her skirt. Various parts of her thighs were sunken as if the flesh had been gouged out. She also walks with a limp.

Bang had formerly been an actress with the propaganda squad of the Musan Mine. She fled the North with her children when her husband starved to death in 2002, but soon fell victim to human traffickers. She was arrested by Chinese police and was sent back to the North, where she was tortured. In 2004, she escaped again.

Bang testified that one 21-year-old pregnant woman who had fled to China and been forcibly repatriated was killed when she refused to have an abortion. Forced abortions of half-Chinese children apparently aim to prevent the proliferation of “unclean” stock due to the North’s archaic obsession with the national bloodline.

Thanks to Takekaze for this sobering report.