IsraellyCool caught this…
The AP says the protester passed out.
Uh-Huh. 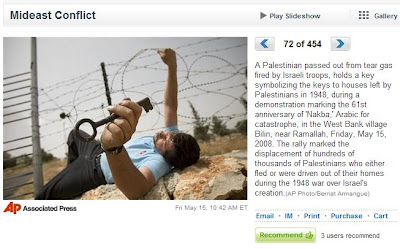 A Palestinian passed out from tear gas fired by Israeli troops, holds a key symbolizing the keys to houses left by Palestinians in 1948, during a demonstration marking the 61st anniversary of ‘Nakba,’ Arabic for catastrophe, in the West Bank village Bilin, near Ramallah, Friday, May 15, 2008. The rally marked the displacement of hundreds of thousands of Palestinians who either fled or were driven out of their homes during the 1948 war over Israel’s creation. (AP Photo/Bernat Armangue)

Jim Hoft
Jim Hoft is the founder and editor of The Gateway Pundit, one of the top conservative news outlets in America. Jim was awarded the Reed Irvine Accuracy in Media Award in 2013 and is the proud recipient of the Breitbart Award for Excellence in Online Journalism from the Americans for Prosperity Foundation in May 2016.
"It's Communism!... It Rips Up What We Are as Americans" - Degan McDowell Goes Off After Joe Biden Blows Off Intellectual Property Rights on Medical Vaccines (VIDEO)
Honeywell Leaks Technical Details of F-35 Lightning II, F-22 Raptor and B-1 Bomber to China - Joe Biden Gives Them a Slap on the Wrist
EXCLUSIVE: Arizona GOP Party Chair Dr. Kelli Ward Weighs in on Biden DOJ Interference in AZ Senate Forensic Audit
California Gubernatorial Candidate Caitlyn Jenner Tears Up, Gets Emotional for California in First Major Interview with Hannity (VIDEO)
BREAKING: Biden DOJ to Interfere with State of Arizona Forensic Audit of Maricopa County Ballots ...Update: With DOJ Letter
See more...