The Far Left is determined to make Miss California an international star.
A trash website posted racy photos of Miss California Carrie Prejean this week.
Prejean, runner up in the Miss America pageant, has been consistently attacked by the Far Left since she admitted that she opposed gay marriage during the contest. 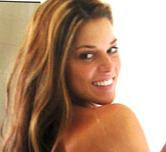 The Far Left continued their attacks on Carrie Prejean this week.

With partially nude photos of her popping up on Web sites questioning her Christian credentials, Miss California USA Carrie Prejean has fired back, claiming the racy pictures are just modeling shots and vowing to continue her battle against same-sex marriage.

“I am a Christian, and I am a model,” Prejean said in a statement released overnight to the media. “Models pose for pictures, including lingerie and swimwear photos. Recently, photos taken of me as a teenager have been released surreptitiously to a tabloid Web site that openly mocks me for my Christian faith. I am not perfect, and I will never claim to be.”

…The Web site thedirty.com claimed that it had six pictures of Prejean. As of Tuesday morning, it had posted one on its site. The picture shows Prejean wearing nothing but a pair of revealing pink panties and smiling over her shoulder at the camera. Her breasts are covered by her arm.

The picture was deemed too racy to be shown on the TODAY Show.

More… Here’s another photo of the gay marriage opponent topless.