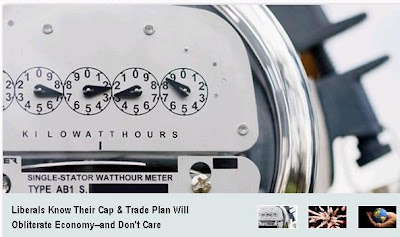 “Under my plan of a cap and trade system electricity rates would necessarily skyrocket. Businesses would have to retrofit their operations. That will cost money. They will pass that cost onto consumers.”

That was Senator Barack Obama speaking about his cap and trade plans with The San Francisco Chronicle on Jan. 17, 2008.

The potential cost of the democrat’s cap and trade policy is enormous. It will likely cost $700 to $1,400 dollars per family per year. The Department of Energy estimated that a similar bill, S. 2191, the Warner-Lieberman cap-and-trade proposal, will increase the cost of coal for power generation by between 161 percent and 413 percent. Human Events reported that the DOE estimated GDP losses (see chart) over the 21-year period they forecast, at between $444 billion and $1.308 trillion. There are estimates that the bill could increase unemployment by 2.7 percent or about 4 million jobs.

White House Budget Director Peter Orszag was on “This Week” with George Stephanopoulos in March. During his interview Orszag admitted that Obama’s proposed cap and trade energy legislation will increase energy costs for everyone. The Heritage Foundation reported that cumulative GDP losses for 2010 to 2029 approach $7 trillion. Single-year losses exceed $600 billion in 2029, more than $5,000 per household. Job losses are expected to exceed 800,000 in some years, and exceed at least 500,000 from 2015 through 2026. In Missouri and the Midwest where energy is “cheap” the democrat’s legislation would cause electricity rates to double. Even the far left Huffington Post admits that the approach taken by the Waxman-Markey bill does not alleviate the problem whereby household consumers will pay higher energy costs.

Democrats know that a cap and trade energy policy will be extremely expensive for American consumers. But, will this stop them from pushing ahead with their dangerous cap and trade legislation?
No.

There is also a list of my recent columns at the page.