After the storm…
Here is an excellent video (taken from HotAir) on the Notre Dame decision to honor Barack Obama, the most radical pro-abortion president in history who has consistently resisted even the smallest legal protection for the unborn. Obama even voted 4 times to support killing newborns who survived abortion.
The speaker is theologian John Piper, the animator is unknown, but both are obviously superb at their jobs:

Listening to Fr. Jenkins deliver his flowery speech to Barack Obama at Notre Dame was like being at a Hopenchange rally. And, it was an insult to any president who came before this ACORN organizer. Jenkins’ praise of the most radical pro-abortion and infanticide president in history was stunning.
I wasn’t the only one who noticed his partisan tone.
Here is a quick objection from a reader to Far Left crank Father Jenkins:

I am wishing you and yours the very best, as well as the University of Notre Dame. I watched the 164th Commencement proceedings. I was sincerely disappointed.

It is clear a partisan nature exists within your institution, which you personally provided, creating an intellectual blindness. It was regretful to see. Some of the rationale for honoring the new President of the United States, was simply sophomoric. Even the rationale provided for the honorary degree, seemed contrived in a very provincial and partisan manner.

The focus on the conception that Mr. Obama “reads” is an example of this rather poor effort. Was Notre Dame implying former Presidents do not read? That is simply absurd, and is often the vision of a blind partisan who wishes to vilify – dehumanize their political opposition. The conjecture and discourse was so juvenile, it proved sincerely lacking for University of Notre Dame’s standing.

For example, after reviewing the contents of President Obama’s controversial ‘Stimulus Bill’, worth nearly 800 Billion in mostly partisan pork spending, suggests this new President and the Democratic Party controlled Congress do not read at all. For it seems they never even bothered to read their own Bill.

Regardless, to honor a President because they supposedly “read”, projects the prior Presidencies were lacking certain intelligence. This is the type of partisan ugliness, which we as a Nation can simply do without. It is basically on the level of lowest amongst us, unable to formulate sound reasons to honor someone for genuine achievement, while debasing others in a childish fashion.

The rationale for your acclaim on Sunday, simply lacks sincere substance. Just as the content of the actual Honorary Degree proved truly vapid. This poorly worded Degree, suggests this new President has restored some reputation of the USA in the World. This is nonsense. There is absolutely little basis to support this incredible claim. In fact, the conception the prior Administration ruined the US Reputation in the World, was a pure partisan manipulation, designed for personal political gain.

Having traveled the Globe for decades for work, I can assure you, the USA is still highly regarded for it’s humane leadership in the World. In fact, leading the World to liberate the formerly oppressed Afghani and Iraqi People is a sincere positive for all. Only a partisan in deep denial, could not see the incredible progress the liberation of over 50 Million in the Middle East. The Bush Administration is also considered heroic in regards to it’s AIDS relief program, which has successfully stemmed the tide of the AIDS epidemic, with some claiming over One Million Lives have been saved.

So far, in regards to the Obama Administration, we have watched their Secretary of State travel to China, to announce that Human Rights (something you are supposedly honoring the new President for…), will NOT be a priority for this new Administration. One can easily challenge the generic, provincial, partisan excuses for your honoring the new President. It would have been far more reasonable, or worthy, if the content of your award had stronger basis.

The Obama Presidency is historic in a number of manners, and could have been noted with distinction without the childish partisan demeaning of prior efforts. Instead of leading, it seems Notre Dame brought everyone down even further to this ugly partisan fashion, which is dividing all. As a Catholic, I was deeply disappointed in your encouraging the worst, and the failure to present a healthy, intelligent, dialogue for all. 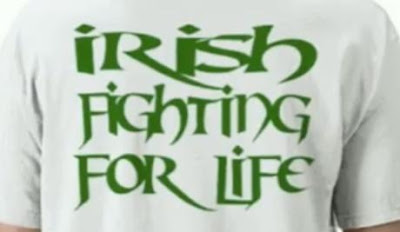 ** Here is the page where you can also write to the University’s President.

Catholic Fire has video from the weekend from Notre Dame campus that shows on split screen the arrest of an 80 year-old priest who opposes abortion and the honoring of Barack Obama on stage.

Paul Mirengoff at Power Line has a terrific post on the scandal.