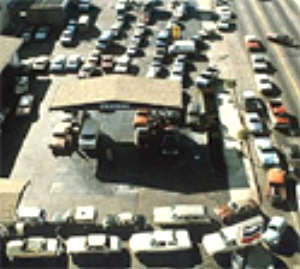 SInce he did such a great job…
Jimmy Carter wants Barack Obama to follow his lead on energy independence.
The Hill reported:

Jimmy Carter, who presidend over the oil crisis of 1979, told Congress Tuesday that America’s energy challenges are deeper and more urgent today than when he was president, but the solutions are the same.

In testimony to the Foreign Relations Committee, Carter called on Congress to make energy independence a top national priority and urged a comprehensive approach that could blunt the influence of lobbyists. Such special interests worked diligently to scuttle his energy initiatives during his presidency, Carter said.

The former president told the panel that such a universal approach was the only strategy that worked when he led the country through the oil and gas crunch of the late 1970s, which resulted in long lines snaking around gas stations and some states resorting to gas rationing. The complexity of the problems required a diverse answer at the time, Carter said, much like today’s crises.

“There needs to be an omnibus proposal that is addressed collectively,” Carter said. “No single element of it can be separated from the others.”

Carter’s comments come amid resistance by some lawmakers to President Barack Obama’s proposals to close oil and gas tax loopholes. Carter recalled how senators from oil-rich states teamed up with lobbyists to derail much of his initial energy legislation in 1977.

A onetime nuclear engineer, Carter said he made energy issues “my top domestic priority” while in office — giving three prime-time TV addresses and a joint address to Congress in the first year of his presidency, all exclusively about energy.

There are currently 4 green lobbyists pushing expensive green energy alternatives for every member of Congress in Washington DC.