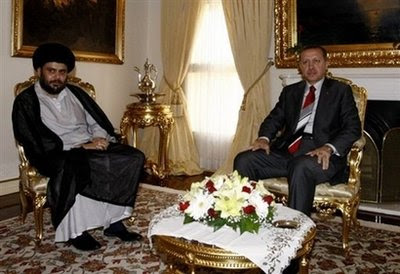 In this handout picture received from the Prime Minister’s press office, Turkish Prime Minister Tayyip Erdogan (right) sits alongside Iraqi Shiite cleric Moqtada al-Sadr as they pose for a photograph prior to a meeting in Ankara on May 1. Sadr — not seen in public for nearly two years — held face-to-face talks Friday with Turkey’s top two leaders, Anatolia news agency reported. (AFP/Yasin Aras)

Moqtada al-Sadr, one of the most radical figures in Iraqi politics, made his first public appearance for two years when he paid a surprise visit to Turkey.

Mr Sadr, a Shia extremist who leads the Mahdi Army militia, is believed to have spent the last two years in Iran. In 2004, his gunmen began an uprising against American troops in Baghdad and British forces in the Shia heartland of southern Iraq and Mr Sadr briefly became the leading opponent of the foreign occupation.

But his militia suffered a crushing defeat at the hands of Iraq’s new army last year and Mr Sadr’s followers have since turned to mainstream politics.

Maybe Obama will hold talks with this killer, too?