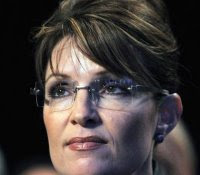 The governor said her Catholic grandfather would be shocked to hear that this prestigious university was honoring a man with such a strong “anti-life” agenda.
Holly Robichaud at The Boston Herald reported, via Free Republic:

Gov. Sarah Palin of Alaska, a strong pro-life advocate, weighed in on the issue with me by e-mail:

“My favorite grandpa, Clem James Sheeran, was Catholic. Irish to the core, his favorite place (other than church) was Notre Dame. I can’t imagine what he would think as the university recognizes someone who contradicts the core values of the Catholic faith by promoting an anti-life agenda. As we learned today, our nation is more pro-life than ever before; it is a very important time to strengthen the message that every baby is created for good purpose and has the potential to make this world a better place.”

While Palin understands this battle is about a fundamental value, Obama supporters trivialize it by suggesting it is about opening a dialogue with people of opposing views. Despite their belittling, this outrage is well deserved. By bestowing the degree on President Pro-Choice, a message is conveyed that he is a role model, someone deserving of recognition in the eyes of the university. Jenkins even said he is an inspiring leader.

Earlier this week Palin spoke out in support of Miss California, Carrie Prejean.

No wonder they hate her so much.

Barack Obama is the most radical pro-abortion president in history.
He voted four times in favor of infanticide.