This follows the news that the radical president’s popularity during his first 100 days is right in the middle of the scores other new presidents received from the public over the past 60 years. 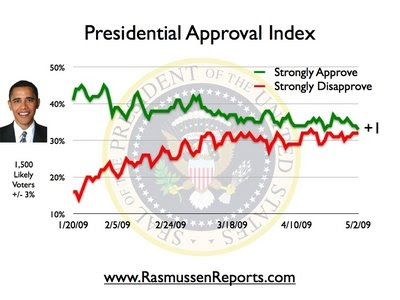 The Rasmussen Reports daily Presidential Tracking Poll for Saturday shows that 33% of the nation’s voters now Strongly Approve of the way that Barack Obama is performing his role as President. Thirty-two percent (32%) Strongly Disapprove giving Obama a Presidential Approval Index rating of +1.

Obama’s numbers may be just average– But the propaganda from the media is above average.