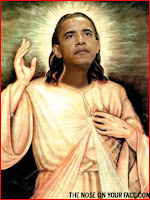 President Obama is distancing himself from the National Day of Prayer by nixing a formal early morning service and not attending a large Catholic prayer breakfast the next morning.

All Mr. Obama will do for the National Day of Prayer, which is Thursday, is sign a proclamation honoring the day, which originated in 1952 when Congress set aside the first Thursday in May for the observance.

For the past eight years, President George W. Bush invited selected Christian and Jewish leaders to the White House East Room, where he typically would give a short speech and several leaders offered prayers…

That’s the way the president will publicly observe National Prayer Day – privately, he’ll pray as he does every day,” Mr. Gibbs said.