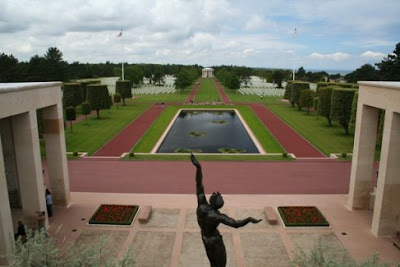 The American Battle Monuments Commission maintains the U.S. cemetery in Normandy, France. The cemetery is situated on a cliff overlooking the English Channel. The 172-acre cemetery contains the graves of 9,387 U.S. servicemembers, most of whom died on D-Day, June 6, 1944. (Courtesy photo)

Last year Barack Obama made the mistake of recognizing dead veterans in the audience(?) during his Memorial Day speech in Las Cruces, New Mexico:

On this Memorial Day, as our nation honors its unbroken line of fallen heroes — and I see many of them in the audience here today — our sense of patriotism is particularly strong.

Memorial Day, of course, is a time to commemorate U.S. men and women who died while in the military service. On Veterans Day we salute our military men and women.

Well, he just did it again during his Memorial Day lecture to the country.
The AP reported:

President Barack Obama saluted veterans and urged his countrymen to do the same this Memorial Day weekend, saying the nation has not always paid them proper respect.

In his weekly radio and Internet address Saturday, Obama said people can honor veterans by sending a letter or care package to troops overseas, volunteering at health clinics or taking supplies to a homeless veterans center. He said it could also mean something as simple as saying “thank you” to a veteran walking by on the street.

He knows the Alinsky playbook forward and backward…
American patriotic holidays and traditions? …Not so much.