More Hope and Change…
** Earlier it was reported that the Obama Administration may have targeted GOP donors in deciding which Chrysler dealerships would have to close their doors.
** Last night it was discovered that a Big Dem Donor Group was allowed to keep all 6 Chrysler dealerships open…. And, their local competitors were eliminated by Obama’s task force.
** The closings also tend to be in “Red” Counties where Obama lost.

Rep. Buchanan found out about it from a fellow colleague.
Again… It was Obama’s task force who made the decision about which dealerships would close and which would stay open.
News 10 reported:

Even a member of Congress is on Chrysler’s dealership hit list.

Rep. Vern Buchanan, R-Fla., a businessman who has owned car dealerships since 1992, learned Thursday that his Venice, Fla., Dodge dealership was among those scheduled to be terminated.

“It’s an outrage. It’s not about me. I’m going to be fine,” said Buchanan, the dealership’s majority owner. “You’re talking over 100,000 jobs. We’re supposed to be in the business of creating jobs, not killing jobs.”

Chrysler LLC disclosed that it intends to close about a quarter of its 3,200 U.S. dealerships by June 9, saying in a bankruptcy court filing that the network has too many stores competing against each other. Buchanan’s dealership is the first listed on the court document specifying the dealerships scheduled for closure.

Buchanan owns five dealership locations in Florida and North Carolina. He once owned 23 car franchises and sold off about 60 percent of his car dealerships before entering Congress. His Dodge dealership in Venice also includes a Nissan store.

“This doesn’t do anything but hurt Chrysler. This doesn’t help Chrysler. And they’re going to be hurting a lot of working families,” said Buchanan, who was first elected to Congress in 2006 to a seat previously held by Rep. Katherine Harris, R-Fla.

While many dealers learned the news through United Parcel Service letters, Buchanan found out from a House colleague.

Then there are the Uftring dealerships in Peoria, Illinois… 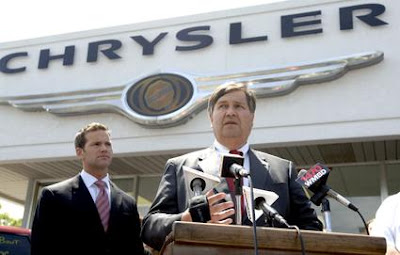 Car dealer Gary Uftring speaks during a press conference in front Uftring Chrysler in Peoria Sunday morning. The Uftring Chrysler dealership is one of the thousands of dealerships being forced to close by bankruptcy proceedings against the ailing automaker. Congressman Aaron Schock, left, has joined with several of his colleagues to officially question the forced closures that will be affecting local economies across the nation. (PJStar)

Rep. Aaron Schock‘s supporter Gary Uftring from Peoria, Illinois is losing two of his franchises even though they are “5 Star Dealerships” that make money.
PJSTar reported:

U.S. Rep. Aaron Schock blasted Chrysler’s decision to shutter nearly 800 dealerships across the country, including two here that he and others say are making money and not costing the automaker a dime.

Joined by Gary Uftring, owner of Uftring Auto Mall, Schock stressed that there should be greater accountability of the governmental task force tapped by the Obama administration to review the overhaul of the domestic auto industry.

To him, the decision to close shop makes no sense. He claims he met all sales expectations and never cost Chrysler money. Rather, he said, he was a “Five Star” dealership, the highest rating Chrysler gives, and one of the better-selling dealerships.

Terry Allen, whose Chrysler dealership in Mason City will be eliminated, said his business was the top sales tax generator in the area. He, like Uftring, said he met or exceeded all expectations from the car maker but in the end, has about three weeks left as a dealer.

More… George W.Bush attended Aaron’s fundraiser. Local libs threw a fit about the cost for security. Aaron left his campaign to return to Peoria to announce he’d pay for it, other costs were covered through the fundraiser.