Despite Non-Stop Bashing Obama Keeps In Touch With Bush 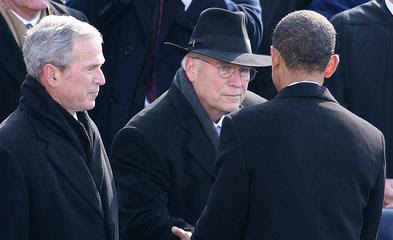 Barack Obama ran his campaign bashing President Bush.
He has attacked President Bush in every major speech since he took office.
Obama has blamed Bush for the record deficits he’s created and even told reporters that President Bush had prisoners tortured.
But, today Barack Obama admitted to CSPAN that he’s also kept in touch with the former president since he’s left office.
CNN reported, via Free Republic:

Despite their opposing political views, President Obama says he’s kept in touch with former President Bush since moving into the White House.

Asked by CSPAN if he’s had any conversation with Bush since the inauguration, Obama replied, “I have.”

“I think that although I’ve only been president four months, I think a general policy of keeping confidence with your predecessors is important,” Obama said in an interview aired Saturday.

Just this week, Obama slammed the Bush administration for taking America “off course” in the aftermath of the September 11, 2001 attack. In a speech on national security Thursday, he said his administration has been forced to deal with “a mess” that was left for them.

Obama told CSPAN that after 9/11, the government “cut too many corners and made some decisions that were contrary to who we are as a people.”

So what does Obama mean be “keeping confidence” exactly?

Obama continues to show his arrogance.
As for Bush, it takes a man of great character to take a call from Obama after all of his awful attacks.

Gateway, you’re a much better man than I am. I’ll just say that Bush took endless attacks from Pelosi, Reid, and Kennedy, too, being a “gentleman” about it, and as a result the public now thinks that conservatives are lying warmongers who looted the treasury. As a result of Bush’s “civility,” we voted in a guy who’s destroying everything we all hold dear.

I don’t regret voting for Bush, but I wish he’d do what Cheney is doing and stop putting his personal relationships with other politicians ahead of the welfare of the entire nation.

Agreed. Bush’s silence ruined the party and the country.

More… Power Line wrote this about Obama today after his latest attacks on Bush:

Obama’s incessant attacks on the Bush administration tell us nothing about former President Bush, but a great deal about Barack Obama: the man has no class.

Still More… This came in the email from boy moto:

GW Bush did not ruin any Party or Country.

He may have saved the USA in many ways after 9-11, but his refusal to sink to ugly partisan levels as President, is not why we are seeing such disastrous Democratic Partisan folly today.

President Bush was slandered and undermined for 8 years. Partisan greed, deceit, etc., are to blame for much of what we see today. Including, a growing bigotry against any who oppose the Democratic Party, has become the new fashion.

GW Bush was an admirable leader, a great President. His classy offering is what we seek in Leadership, and he should be praised for his decency. I cannot imagine what sort of burden this Man carried, after the attacks of 9-11, and having Our bravest in harm’s way for many years. And yet, we see the most juvenile judgments from those who haven’t had such responsibility.

* One must NEVER place the blame of the actions – demeanor of the negligent, unethical, deceitful, upon those who are innocent. Or those who may have not been able to defend themselves.

I strongly feel, this is part of the enabling which aided the foolish likes of Pelosi, seeing the very worst in some fine human beings who did their best. Conservatives lost their objectivity for many years, growing overtly reactionary, even emotive, and became quite self destructive in the process.

Advocating for more strong challenges to the folly is one thing, calling someone truly innocent, who was actually quite admirable, of “ruining” a Party or Country is wrong in my book.

This is more NONSENSE:
“…putting his personal relationships with other politicians ahead of the welfare of the entire nation.”

GW BUSH NEVER put the welfare of this Nation, below his relationship with other politicians. He sacrificed his own reputation often for the benefit of the USA. His resolve alone in regards to the essential fight in Iraq, is proof enough. We should be thankful.

Some are so frustrated with ugly offering of the unethical Democrats, they look for anything to blame, but this only makes matters far worse. The blame should remain on those who create the mess, which is currently those ugly Partisans supporting the corrupt DNC.

If anyone believes GW Bush was not in communication with Mr. Cheney, and supported these recent public challenges to the Obama folly, they simply are not thinking clearly.

President Bush and his Administration deserve so much better than this. It is far too easy for some who sat on the sidelines, who are not privy to so much information, to debase as a sideline cynic.

Please enjoy your Memorial Day weekend.
So many brave Americans to remember…

Perhaps you could pass this differing opinion on to the likes of Tom W.