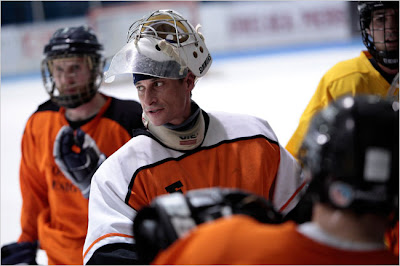 Rep. Anthony Weiner played hooky last week from the House of Representatives — and then played hockey in Manhattan, The Post has learned.

The puck-loving pol, who is considering running for mayor, skipped a House session on April 27 that included three votes — among them a measure to reauthorize a $250 million program that last year set aside $1.8 million for New York in emergency preparedness funds.

The Democratic congressman — who once said he opted to attend SUNY-Plattsburgh because of its hockey team — missed two other votes that night, including one to support the goals of National Volunteer Week.

Instead, Weiner hit the ice to play goalie for the Falcons, his amateur hockey squad at Chelsea Piers.

In any other line of work he would be fired.
It’s a good thing he’s a democratic Congressman from New York.