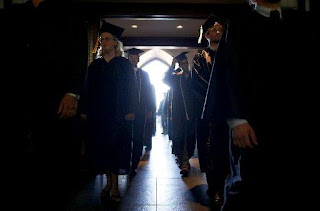 Graduating university students enter the Ave Maria oratory on Saturday at the start of the school’s commencement ceremony for the class of 2009 on Saturday. (Michel Fortier/Naples News)

The Commencement Speaker at Ave Maria University blasted Notre Dame for inviting the most radical pro-abortion and infanticide president in history to commencement ceremonies this year.
The Naples News reported, via Free Republic:

Commencement speaker Dr. Thomas Hilgers, an obstetrician from Omaha who Ave Maria President Nicholas Healy described as a pioneer in “gynecological practices that are line with the teachings of the Catholic Church,” used his address to blast Notre Dame University’s decision to host President Barack Obama as its own commencement speaker on May 17.

Calling Obama “viciously pro-abortion,” Hilgers railed against Obama’s policies while likening the president to his own commencement speaker in the 1960s – a young priest Hilgers said later turned out to be “a denier of the Resurrection, pro-homosexuality and pro-contraception.”

Obama has “made available embryonic stem cell research funds, and as an obstetrician, I am in the cross-hairs of Obama’s administration,” said Hilgers, who received an honorary degree from the university.

Addressing the students directly, Hilgers said: “You’re going to be in the group of people – praise the Lord – who will have the opportunity to be a part of the culture of life.”

Hilgers told the graduates that their place in “the culture of life” was integral to their futures.

“Pope John Paul II has called us all to a culture of life within a civilization of love,” Hilgers said. “God calls all of us to do something special, and with prayer and perseverance, you will find your calling.”